New Zealand boasts some enviable facts when it comes to the coastline.

The Land of the Long White Cloud occupies sixth spot on the list of the largest island nations – with the North and South islands combining to contribute the bulk of the 268,000sq/km of territory – and 15,000km of coastline makes its outer edge the ninth longest in the world.

With that 15,000km of coastline comes marvellous beaches and New Zealand has a long list of seaside sites to swim, stroll and sightsee.

New Zealand is only 450km across at its widest point – and 1km at its most narrow near Auckland – which means no dot on the map is more than 128km from the coast, and a visit to a beach is never far away.

From the endless and empty stretch of sand that defines Ninety Mile Beach near the top of the North Island, past Auckland's black sand bays and the rolling breakers of Wainui Beach near Gisborne, to the secluded sites of Stewart Island's Paterson Inlet.

But where to start exploring the coastline between Cape Reinga and Slope Point? The Inspiring Journeys team is here to help, and has come up with a dreamy list of New Zealand's top beaches.

New Zealand's North Island occupies the highest lines of latitude to deliver sub-tropical temperatures and a mild year-round climate that see parts of the coast sizzle during summer.

This agreeable weather welcomes beach breaks, and North Island locals claim they have the most popular summer holiday spots and unsurpassed stretches of golden sand.

Think snowy silica and you get a glimpse at what's waiting on Northland's Rarawa Beach. This destination, inside the Paxton Point Conservation Area 60km by road from the Cape Reinga Lighthouse, is celebrated as the whitest stretch of sand in New Zealand.

The scenic spot boasts a remote beachside camping area that's a favourite with twitchers visiting to see the birds that nest in the dunes between August and March, and the shallow water beside the sand turns flawless shades of turquoise when the sub-tropical sun is shining.

Piha is the famous black-sand beach on the North Island's rugged west coast 45km from Auckland. The destination is on the travel wish-list of most visitors and is known for scenic cliff-top treks, booming breakers that roll across the Tasman Sea to tempt surfers, and summertime swimming when surf lifesavers patrol between the flags.

If that's not enough black sand to satisfy the soul then continue to Karekare Beach – made famous by Jane Campion's 1993 flick The Piano – and take the detour to dip at Karekare Falls which is a stone's throw from the sand.

When it comes to Instagrammable locations, you can't go past Cathedral Cove in the heart of The Coromandel to the east of Auckland.

This icon is only accessible on foot or by boat, with the wander a leisurely 2.5km stroll that takes around 90 minutes to complete and hugs the coastline to finish beneath the baronial rock archway that stretches across the sand.

A second spot on the eastern edge of The Coromandel peninsula must also make the list. Hot Water Beach is just 10km from Cathedral Cove but offers a vastly different must-do experience thanks to the thermal mineral water that bubbles to the surface beside the sand.

For a couple of hours on either side of low tide visitors can construct a personalised heated pool in the sand and soak in the warm therapeutic water that’s packed with healing minerals like magnesium, potassium and calcium.

Ocean Beach, in the Hastings District just south of Napier, is a favourite with families and fisherfolk because it has escaped development to remain near original and promises surf lifesavers on duty during the summer months.

While the climate is a little cooler across the South Island, the coastline is considerably more dramatic with southern squalls driving the storms that blow in from the Tasman Sea and Pacific Ocean to pound the coastline and create spectacular weather-beaten beaches.

It's tough to crown just one beautiful beach inside New Zealand's smallest national park, with the pristine parcel of protected land crowning the South Island home to one of the country's most accessible hikes as well as empty beaches with water the shades of precious gems.

While Torrent Bay and Bark Bay are both contenders, Awaroa Beach takes the title in this part of the planet. The spot – which made the headlines in 2016 when a considerable crowdfunding campaign saw it bought and added inside the national park boundary to ensure it remained public property – features a shallow tidal estuary with water warm enough for everyone to get wet. 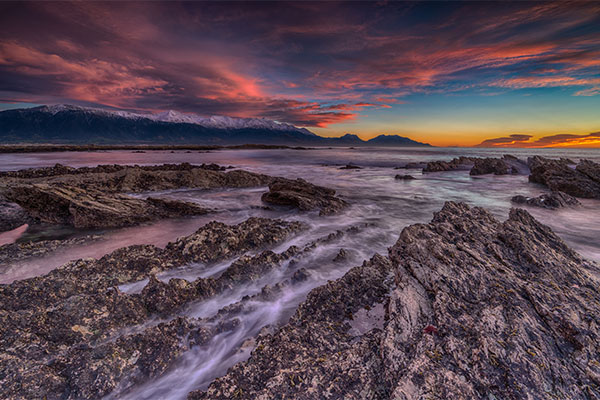 The north-eastern corner of the South Island hides a wind-swept stretch of coastline that provides a playground for countless marine creatures including fur seals, penguins, dolphins and the migrating whales that temporarily dwell during their annual north-south transit.

The town of Kaikoura rests at this region's heart – nestled between the rugged peaks of the Seaward Kaikoura Range and deep Pacific Ocean blue – with the beaches stretching away from the sleepy settlement suited to wildlife-spotting strolls and picnics feasting on fresh local seafood.

This dramatic destination, carved by the creeping crawl of prehistoric glaciers, is a cool-climate haven for long-haul hiking so not the most apparent location for a must-see beach.

But Milford Sound, deep inside Fiordland National Park, is the place to find Harrison Cove with the modest feature only accessible by water on a sightseeing cruise or kayak expedition.

Locals say the landmark is shaped like a roaring lion's head, with the Harrison River meeting Milford Sound in the shadows of the sheer waterside summits, and while too chilly to swim the destination is home to the Milford Underwater Observatory which provides a look at life under the surface.

A journey along the South Island's south-eastern coast is not complete without a stop to see the Moeraki Boulders on Koekohe Beach an hour's drive from Dunedin.

These behemoth rocks look like dinosaur eggs sitting in the sand, with Maori legend explaining the spherical stones are "gourds washed ashore from the great voyaging canoe Araiteuru when it was wrecked upon landfall in New Zealand hundreds of years ago".

New Zealand's wintertime playground, and gateway to The Remarkables and Coronet Peak ski areas, is also a destination for warm-weather holidays with travellers tempted by the tramping trails weaving through the Alpine wilds surrounding the pretty settlement.

Lake Wakatipu – the sapphire pond at the base of the majestic mountains encircling Queenstown – hides Queenstown Bay, with this beach beside the town's compact CBD bathed in sunshine when the weather is fine and boasting fresh water that's just warm enough for a brave mid-summer dip.

BEACHES IN NEW ZEALAND: THE OTHER ISLANDS

There's more to New Zealand than just Te Ika-a-Maui and Te Waippunamu – the two biggest of the country's 700 islands – with the other parcels of waterborne property dotted beside the North and South islands boasting beaches worthy of making our list. 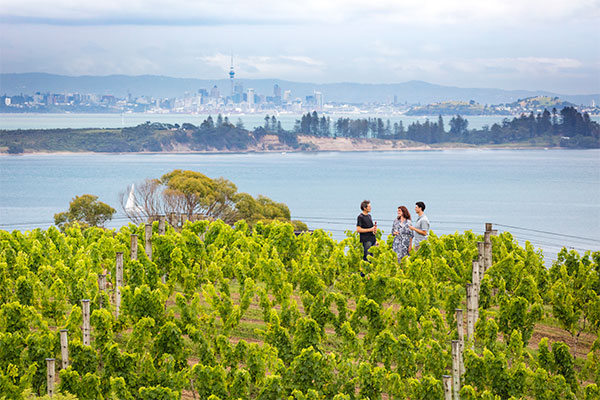 Over the past few years Waiheke Island has blossomed into the preferred weekend and mini-break playground for those hailing from the country's biggest city, with this famed wine-making region delivering an agreeably dry micro-climate and swag of sleepy seaside settlements.

While Onetangi Beach is the island's most famous stretch of sand, and Picnic Bay is a favourite spot for Auckland views and sunset swimming, it's Enclosure Bay that’s considered to be the best local secret.

It has the island's warmest water and, with a ring of almost-submerged boulders protecting it from Hauraki Gulf, it's the perfect place for tranquil swimming or even snorkelling to observe the local seahorse population.

Stewart Island – the picturesque plot considered the smallest of New Zealand's three main islands – sits 30km across Foveaux Strait from the bottom edge of the South Island and is one of the country's best-kept secrets delighting those travellers that take the time to visit.

Near 85 per cent of the island is national park and, while officially classed as Subantarctic, the clear water and white sand make the destination one of the best places in New Zealand to break beside a beach.

Bathing Beach, which is a short strolling distance from the island's main hamlet of Oban, is a sheltered swimming spot for those brave enough to take a plunge this far south. The golden sand is ready for exploring at low tide when the rocky headland doesn't divide the stretched length of curved sand and history lovers can see evidence of the district’s industrial history during a walk around the neighbouring Mill Creek estuary.

Ulva Island hides in the heart of Stewart Island's tranquil Paterson Inlet and is a boon for botanists and birdwatchers who explore one of New Zealand's few public pest-free sanctuaries on foot following trails weaving around the protected plot from Post Office Bay.

The Rakiura National Park island has been pest-free since 1997 and is now home to thriving populations of kiwis, wakas, saddlebacks, tomtits, parakeets, robins and yellowheads hiding in the lush centuries-old rainforests.

Lingering at Boulder Beach to take in the views of the forest-clad hills framing the inlet is a highlight of any wander around Ulva Island's northern corner, while Sydney Cove has a strip of golden sand perfect for peaceful mid-hike picnics.

The Bay of Islands is described by New Zealand Tourism as "a subtropical wonderland of islands, marine life, kauri forests and Maori myths" with the destination a three-hour drive north from Auckland long accommodating generations of Kiwis keen on a waterside escape.

The 16km-wide harbour, which enjoys hot summers with temperatures climbing into the low 30s during January and February, is home to 144 islands with Urupukapuka being the biggest and the place for those seeking sandy solitude to find a quiet beach with a view.

Day-trippers should pack their walking shoes, as well as swimmers and snorkelling gear, and follow the epic Urupukapuka Island Archaeological Walk from the ferry stop at Otehei Bay until a suitably secluded patch of sand appears beside the track.

The South Island's spectacular Marlborough Sounds is another of New Zealand’s hidden tourism gems, with most visitors only seeing the region from the porthole of a ferry while making the journey across Cook Strait to connect North and South islands touring.

The Marlborough Sounds consist of four distinctly different sounds – Queen Charlotte, Kenepuru, Pelorus and Mahau – and, while most of the territory is stretched peninsulas formed by submerged river valleys, there are some islands boasting beautiful beaches.

Blumine Island is 22km from Picton and the tracks winding around this scenic reserve link empty beaches perfect for picnics, paddling and panoramic views as well as passing the historic WW2 gun emplacements constructed to provide a safe anchorage for the US Navy. 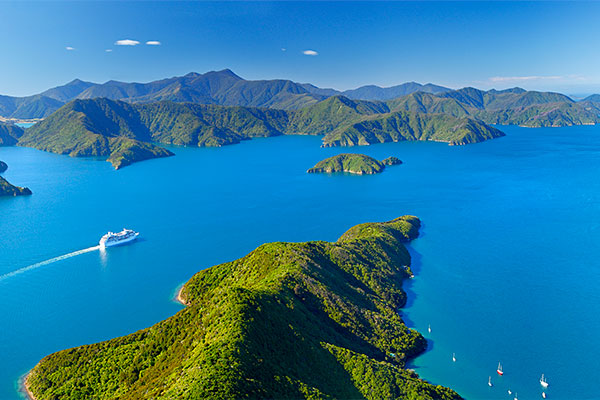 Inspiring Journeys offers a curated collection of five bespoke small-group journeys that help travellers set on seeing the most captivating corners of the New Zealand coast discover the stories that make this dynamic destination magically memorable.

The Long White Cloud is an epic but easy 19-day adventure that traverses the North and South islands to take in many of those destinations boasting beaches that have made our list.

The hosted holiday starts in Christchurch, loops the southern half of the South Island via Fiordland National Park, follows the east coast in the shadow of the Seaward Kaikoura Ranges, crosses Cook Strait from Picton to Wellington, then journeys north via Rotorua to finish in Auckland.

The thoughtful itinerary detours to Milford Sound, Queenstown, Dunedin, Kaikoura, the Marlborough Sounds, Hawkes Bay and Auckland to take travellers to some of New Zealand's very best beaches and at a relaxed pace that makes for comfortable sightseeing. 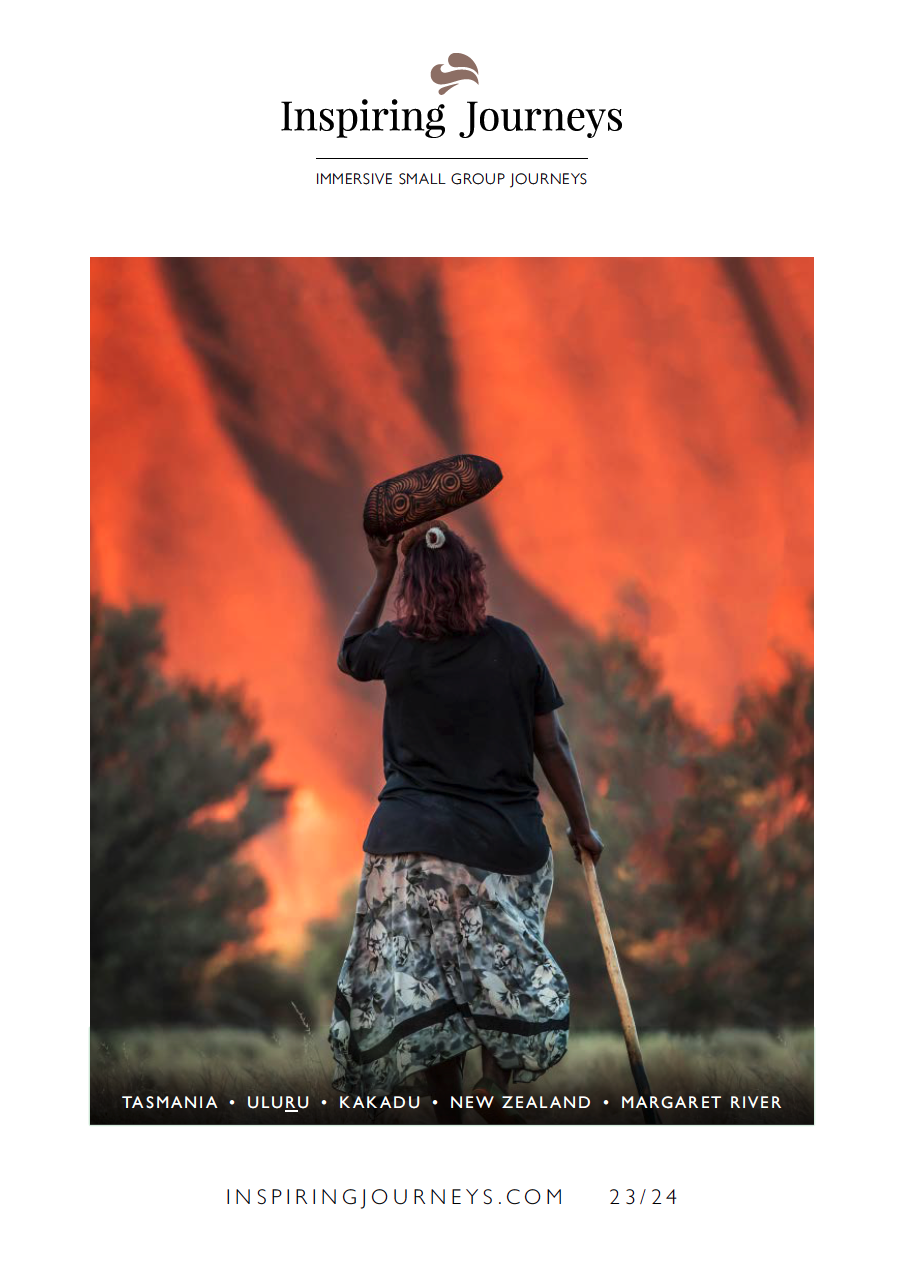