Māori are the indigenous people of New Zealand, having arrived from eastern Polynesia by canoe somewhere between 1320 and 1350. New Zealand is widely believed to have been uninhabited before this time, with the arrival of Europeans in the 17th century bringing huge changes to the Māori way of life. Māori culture continues to play a massive role in modern New Zealand culture, and is an integral part of the New Zealand experience for any visitor.

Māori traditions describe the arrival of ancestors in large ocean-going canoes around 1350. Māori came from Polynesia, a large Pacific area that includes Samoa, Tahiti, Hawaii, and Easter Island, among other island groups. Māori mythology goes back much further, however, with a place called Hawaiki acting as the mythical homeland of all Polynesians before they spread across the Pacific Ocean.

Hawaiki is known by many names, including Avaiki in the Society Islands, Savai'i in Samoa, and Havai’i in Reo Tahiti. According to some historians, Havai'i is the old name for Raiatea, which is the second largest of the Society Islands and most likely ancestral homeland of the Māori. After they settled in New Zealand, the early Colonisation period was followed by the Classic period, with a fierce warrior culture having developed by the time of European arrival.

The Treaty of Waitangi was signed in 1840 to recognise Māori land ownership, which laid a groundwork of respect between the Pākehā and Māori populations. Today, Māori culture is at the heart of New Zealand culture and continues to have a profound impact on modern New Zealand society.

Māori language, known as 'te reo', is the indigenous language of New Zealand. This language has Eastern Polynesian origins and is closely related to languages spoken in the Cook Islands, Tahiti, and Tuamotu archipelago. Te reo was the dominant language of New Zealand at the time of European arrival, before quickly diminishing to minority status in the mid-1800s. Most Māori people spoke te reo until World War II, with a decline experienced until the 1980s when revitalisation efforts were made.

Te reo was recognised as an official language of New Zealand in 1987. Māori language programs were launched in schools, and Māori was increasingly used as an instructional language by the public and private sectors. In the 2013 national census, roughly 149,000 people could hold an everyday conversation in Māori, representing 3.7% of the national population. The Māori language holds an important place in New Zealand, not just for native speakers, but for the entire population.

Māori share a number of cultural concepts and traditions, some of which involve celebrations and rituals. Māori culture consists of narrative myths rather than historical stories, so these concepts are rarely linear and can be challenging to understand from a Western perspective.


The concept of mana is central, with this sacred power or energy given by the gods but available to the wider community via specific traditions, tribal structures, and chiefs. Mana is both simple and complex, highly personal but also related to connection with family and community. A person with mana has presence and strength, and while inherited, it can also be acquired or lost through actions. Mana is central to many Māori rituals and traditions because it highlights important people in the community and how their power is expressed and transmitted to others.


The concept of whakapapa establishes personal mana and tribal connections, and the concepts of tapu and ute are related to the preservation of harmony and structure. Tattooing and painting are important Māori rituals, as is carving, weaving, music, dance, and cooking. Visiting important traditional locations like Tamaki Maori Village is the best way to experience local Māori rituals and traditions for yourself.

Māori performing arts are an important part of New Zealand’s cultural heritage. Along with being entertaining, the music, dance, and stories are also endlessly fascinating. The haka performed by the All Blacks rugby team is one example of kapa haka, with this type of rhythmic dance and vocal performance carried out as a challenge. Kapa haka typically involves mixed groups of men and women, all dressed in traditional Māori outfits and performing in unison. Witnessing an authentic Māori performance is a must when visiting New Zealand. 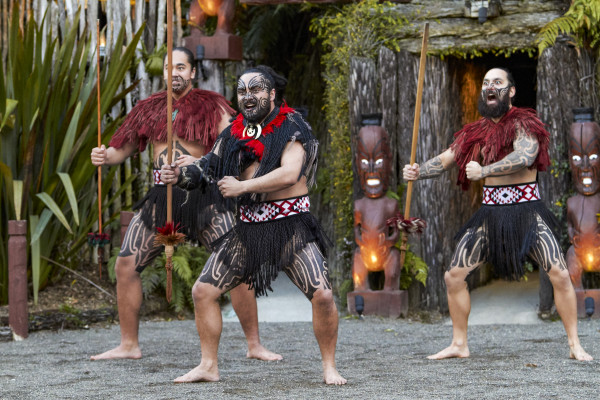 Māori art practice has a long and rich history across New Zealand. Art practices central to Māori culture include wood carving or te toi whakairo, and weaving or raranga. Both of these traditions are responsible for handing down stories, with gods said to have communicated through craftspeople to the wider community. Along with carving and weaving, Māori art can be seen in tattoos, paintings, music, and dance.

Most Māori carvings feature both stylised human figures and patterns, often with three fingers and geometric shapes that include spirals, ridges, notches, and scales. Carving was used on multiple structures, including large meeting houses and canoes. Weaving is another important Māori art practice, with cloaks and clothing produced along with blankets and textiles. Māori art is widely available to purchase in New Zealand, with a number of traditional Māori art forms enjoying somewhat of a renaissance.

Māori culture is full of interesting mythology, including ancient stories and legends passed down in family and tribal groups. These stories start from the very beginning, with narrative myths going back to ancient times while still holding contemporary importance. This mythology is rich and complete, accounting for natural forces, landscapes, weather patterns, celestial bodies, and animals. Māori traditions speak of spirits and gods that relate to the everyday world through symbolic themes.

The Māori have a long and rich history that stretches beyond time into the land of myths and legends. Rather than the historical cause and effect paradigm of modern times, these stories involve strange relationships that shift through time and space. From Rangi and Papa to Tāwhaki, legends and heroes have a profound effect on every aspect of Māori culture. Stories are linked through genealogy and tradition, and transformed over time into tribal structures, moral codes, and elaborate art forms.


Māui is an interesting example of a culture hero and trickster who catches a giant fish that becomes the South Island of New Zealand. In other myths, Māui is responsible for bringing fire to the world, slowing the sun, and attempting to win immortality for mankind to his ultimate demise. There are plenty of interesting legends to learn about when travelling through New Zealand.

If you want to learn more about Māori culture, visiting New Zealand in person is an absolute must. Many of the art forms and legends central to Māori culture have been passed down, with time spent on the ground the only way to soak up the incredible history and culture of Aotearoa. Inspiring Journeys offers tours across the length and breadth of New Zealand, from the cities of Auckland and Wellington to the Māori heritage of Rotorua and beyond.