When we think of Australian cuisine, our minds often jump to modern-day ‘classics’ such as barbecued snags, a chicken parmigiana or maybe even a delicious pavlova for dessert – yum. There is however something inherently Australian that’s often left off that list, Australian Bush Tucker. Bush tucker, or bush food, is any described as any food that’s native to Australia. The Indigenous people of Australia, who have lived in the Aboriginal Countries that make up Australia for over 60,000 years, have a symbiotic relationship with the land and have lived off the native flora and fauna for many generations. Much of the Aboriginal bush tucker is still enjoyed today, though now also by Australians of all different cultural backgrounds. Over the past few years, many of Australia’s leading contemporary chefs have wholly embraced indigenous ingredients and incorporated them into their restaurant menus. This comes as more and more people look to actively celebrate native ingredients and learn more of the Indigenous culture of Australia.

Being largely natural, bush tucker is both extremely nutritious and incredibly tasty. Many of these native foods are packed with micronutrients, protein and fibre, and low in sugar. 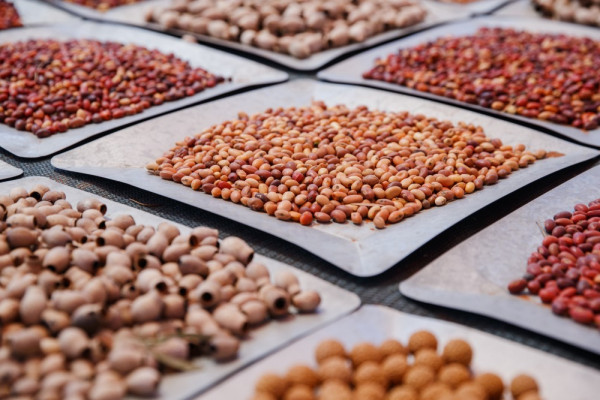 Australia’s nutrient-rich soil and incredible growing conditions mean that every region of Australia produces edible native foods, jam-packed with nutrients. The fruit has long been a staple in the traditional Indigenous diet. Red fruits like quandongs can be eaten raw or dried and are often made into chutneys or jams. Plums are also popular in the traditional bush tucker diet, such as the Kakadu plum which contains 100 times more Vitamin C than an orange!

Other fruits and berries from the bushlands include native gooseberries, muntries – which are often compared to blueberries because of their small size and high antioxidant levels – lady apples, wild oranges and passionfruit, finger limes and white elderberries.

There is also a range of bush tucker plants, such as Wattle, Mistletoe and Honeysuckle that grow in the wild and are edible, though you have to be extremely careful as only certain parts of these plants are safe to eat! It’s best to consult a comprehensive Aboriginal bush tucker plant expert a learn firsthand exactly what is OK to eat. 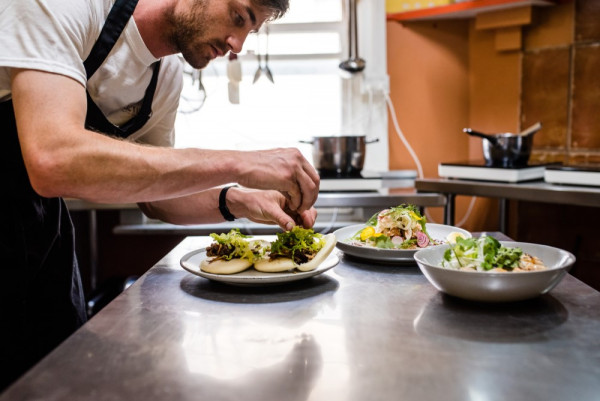 The Aboriginal people have long been known as extremely proficient hunters, who took advantage of the widespread wildlife which surrounded them and learnt to make the most of every animal slain. The two animals which feature on Australia’s coat of arms, the emu and kangaroo, were a favoured choice by many hunters as they were both high in protein and low in fat. The meat was traditionally cooked over an open fire, or by steaming it in a fire pit.

Today, kangaroo is still a popular meat option for health-conscious eaters as it’s extremely lean yet has more protein than beef! Other land animals which were commonly hunted and eaten, include goannas, snakes, crocodiles, wallabies, turtles, echidnas, eels and ducks. The Aboriginal people also took to fishing in the oceans, rivers and ponds to get their protein fix. Mud crabs, barramundi and other freshwater crustaceans, like marron, were easy to catch and made for a delicious meal.

Marron is now considered a luxury ingredient and can be found on the menus of many high-end restaurants. 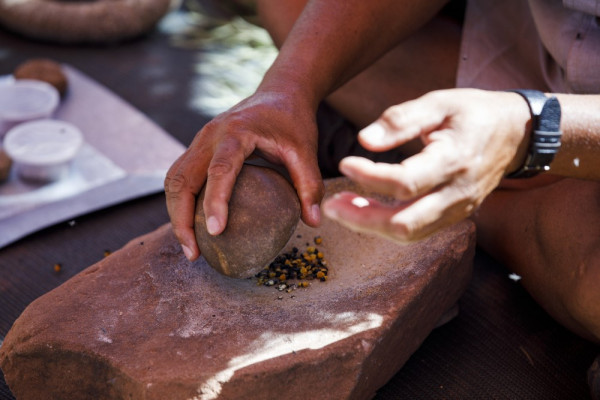 The majority of the edible seeds, like mulga seeds and wattle seeds, require soaking, pounding, grinding and baking before they are consumed. This careful ritual ensures that all toxins are removed from the food prior to eating. Seeds like the cycad palm seeds and seeds from the pigweed plant can be eaten or turned into bread and cakes.

The bunya nut, similar to a chestnut in both taste and in appearance, was a prominent food for Indigenous Australians. It can be eaten raw, cooked on hot coals or turned into a paste.

Other bush nuts which can be enjoyed include the macadamia nut, the peanut and the Australian cashew. 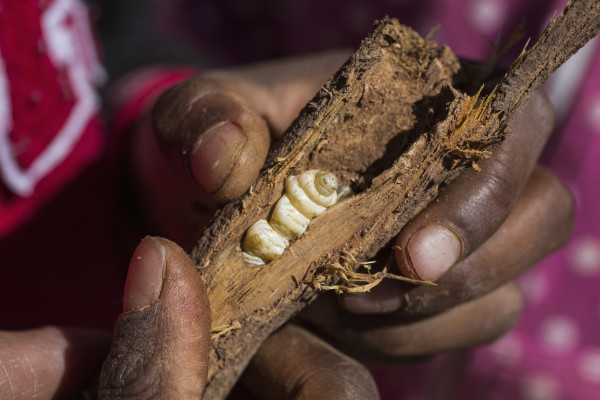 Time, and time again, bugs and insects become hot topics in the health and wellness space as they’re praised as ‘superfood of the future’. Insects are highly nutritional, as the majority of bugs are rich in protein, full of healthy fats, iron and calcium, and low in carbohydrates. The Indigenous Australians were of course aware of their significant health benefits long ago, including them in their well-balanced diets.

Arguably, the most celebrated bush tucker bug is the witchetty grub. The nutrient-dense grub is a fantastic source of calcium, thiamine and folate; it’s rich in protein and does wonders for the immune system. The grub has a nutty flavour and can be eaten raw or roasted.

Other insects favoured by the traditional Aboriginal people can include green ants and their white larvae – which are high in fat content and said to help relieve headaches – river red gum grub, Coolibah tree grub and tar vine caterpillars. 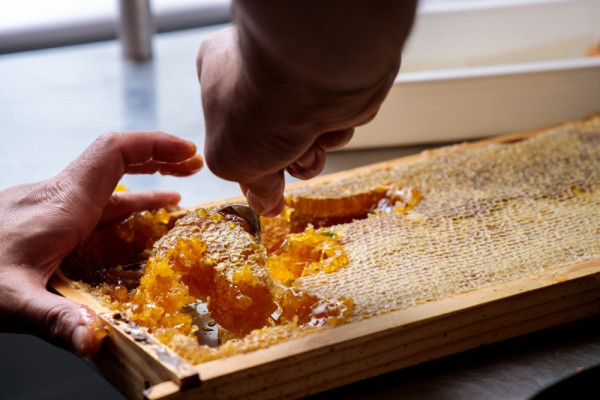 The native bushland of Australia boasts an array of sensational spices, herbs, kinds of honey and nectars. These bush tucker items can be used to add flavour to one of the aforementioned food groups, acting as a natural medicine it is added to water to make a healthy drink or herbal tea.

Both lemon ironbark and lemon myrtle can be used in cooking to add a pleasant fragrant finish or made into herbal tea and taken to relieve cramps, fevers and headaches. Similarly, native ginger can be added to meat dishes to increase flavour or infused in water and sipped on to ease an upset tummy.

Other native herbs and spices include mountain pepper, aniseed myrtle, native basil, blue-leaved mallee and tree gums which can be dissolved in water with honey to make sweets or jelly for children. Honey from the native bees and the nectar from the flowers of bloodwood and corkwood trees are sweet little bush tucker treats that go perfectly on freshly baked bush bread or seedcake.

While bush tucker ingredients are celebrated in modern-day cooking by leading chefs around the world and can be enjoyed at a number of high-end restaurants, it’s important to remember their heritage and the Indigenous Australians who first discovered them.

Learn more about Australian bush tucker in the Northern Territory!

At Inspiring Journeys, we love helping people to discover Australia's Indigenous culture. In the Northern Territory on a 5 day Inspiring Journey's Outback Australia: The Colour of Red tour, you'll be invited into the Wanmarra Aboriginal Community, to learn about the Luritja and Pertame people’s spiritual connection to the land and traditional bush tucker foods.

This unique Kar­rke Abo­rig­i­nal Cul­tur­al Expe­ri­ence is one of many Indigenous owned and operated experiences across the Northern Territory. 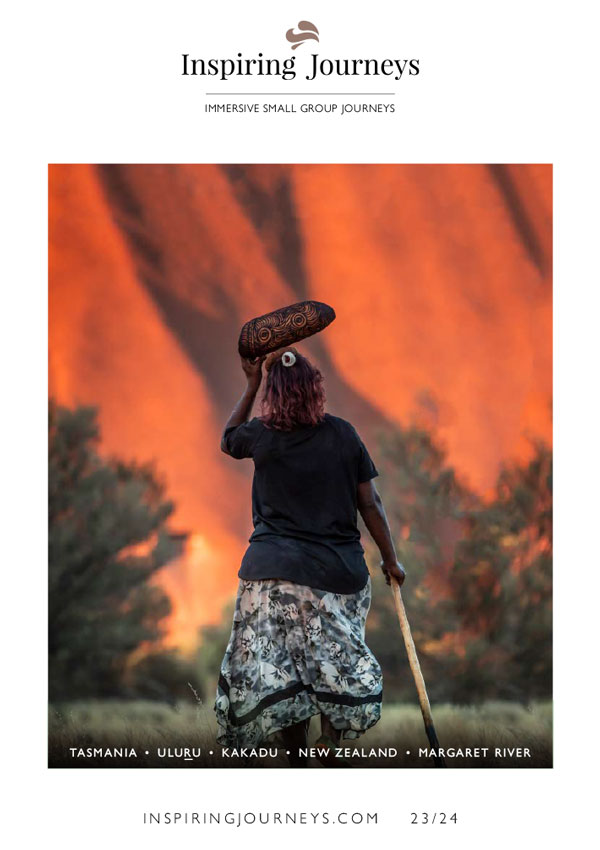